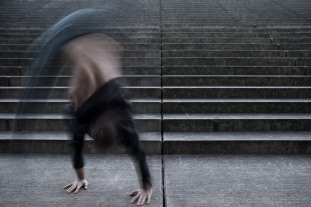 How   much   is   the   continuously   developing shape of our human habitus informed by our ways of physically moving through this world? We have been forming distinct and exclusive urban landscapes that in turn are dictating our movements through these spaces. The Untamed Urban is subtly challenging the prescribed use of infrastructure that reduces human movement to pure functionality by introducing the element of playfulness to the navigation of the urban jungle. Inspired by the limits of our human physique and that of our fellow creatures, does exploring different ways of traversing urbanity provide opportunities for developing a much needed sense of empathy towards our nonhuman cohabitants, small and large? (with Oscar Henke) 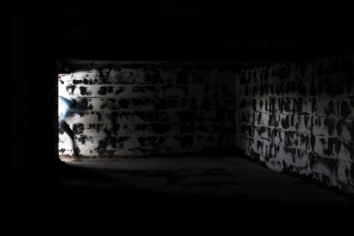 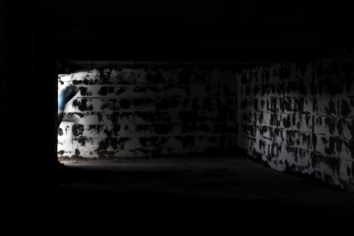 Body Topographies is an exhibition of photographic works featuring dancer Rachel Sweeney. The collaborative work explores the creative links that exist between the body and its environment. Created in a series of dynamic locations throughout Australia during a research trip, the work offers a highly unusual insight into a vital and ever changing relationship between body and environment through a series of movement portraits which illustrate physical processes surrounding ecological change.

Between Coming and Going

Between Coming and Going explores the element of movement and dimension of time within the frame of photography. Suspended in eternal loops in which simplicity and complexity are of equal value, these engagements draw on iconic motifs and the atomic nature of the scene before us. Connecting with transience to hold contemplative space through stillness, discrete narratives unfold…

The natural environment becomes a collaborator in this performance.  Three moving images framed still like a photograph come to life with the subtle movements and playful interactions of performer, dancer Rachel Sweeney, and the coastal landscape, with both closely cropped and expansive views… 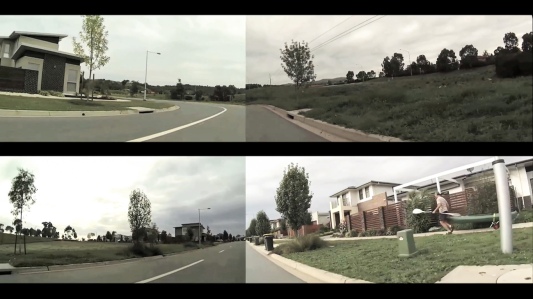 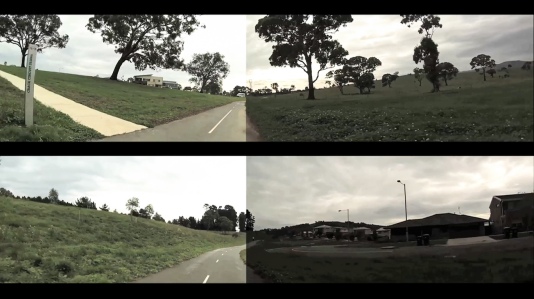 The Bitumen Divide is an observational video work taken whilst circumnavigating Canberra’s newly hatched suburb of Crace by bicycle one mid-week morning in April. Cycling had become my chosen form of transport since moving to Australia’s capital, affording me to actively engage with and observe my physical surroundings as I traverse the spacious and undulating territory.
Crace itself is set into natural temperate grassland, tucked inbetween box gum grassy woodlands and major arteries connecting the sprawling city. The new development features a pathway navigating the entirety of its boundary and makes for convenient travel along the smoothly paved and barely trafficked surface. This path along the threshold also serves as a contemplative platform for considering what lies within and beyond it, for observing the various habitats, those newly created and those impinged upon.

Severely Severed (2013) is a study of physical synaesthesia where the body’s receptors are deliberately distorted: the fingers act as olfactory functions / toes explore topographic detail and skin becomes a porous threshold between sound and rhythm. Recorded at Severs Beach, NSW, this short film is an improvised collaboration between Rachel Sweeney and Heike Qualitz

Severs  beach is a piece of paradise on the Far South coast of NSW, Australia with a history of human encounters reaching back over 3000 years. Oyster middens along the shoreline are the telling remnants of a longstanding engagement with the place.
Those oysters continue to flourish in the tidal waters. Their protective shells forming sharp implements, which can easily sever the surface of soft skinned bodies when navigating the shallows, releasing a liquid of equal pH to the sea. One complex system dissolves into another… 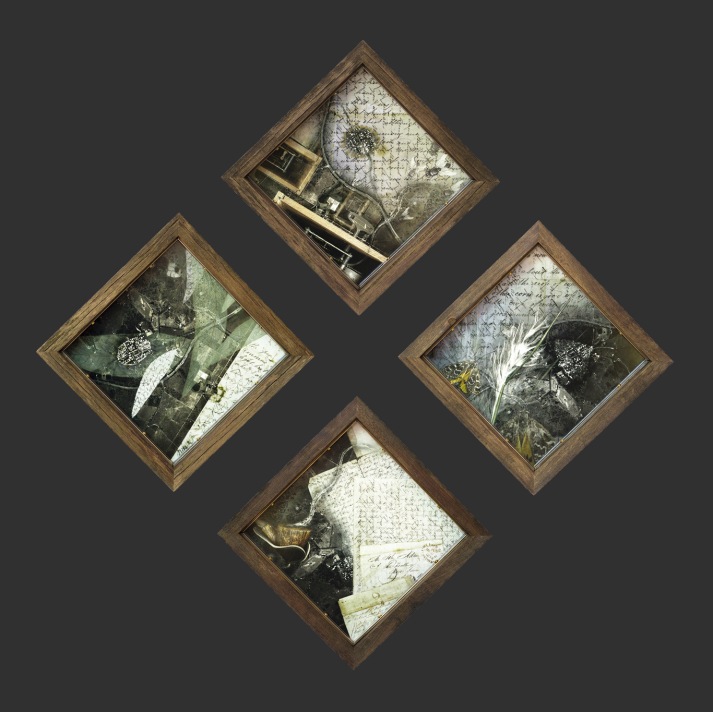 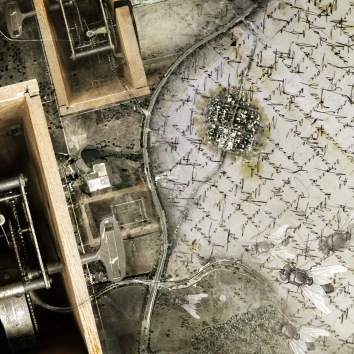 Frame of reference: Western leaf beetle. Chrysomelidae, leaf beetles, live in symbiotic relationships with the trees they inhabit, but can be harmful to the plant’s health with a population increase – a delicate balance between benefit and detriment. 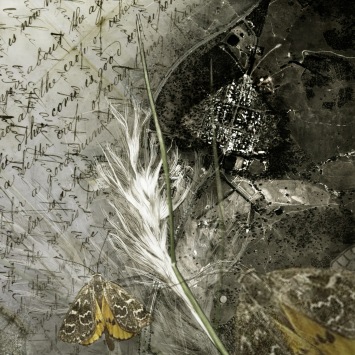 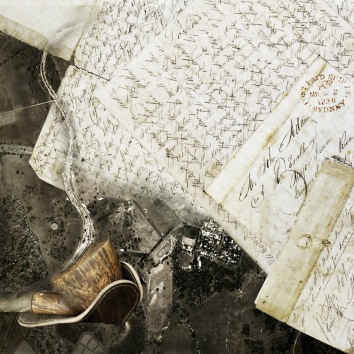 Frame of reference: Southern smoke signals. These letters, dating back to pioneering days, remind of communication at times of material scarcity. They are aesthetically fascinating objects, as well as ultimate containers of narrative and portals into the past. 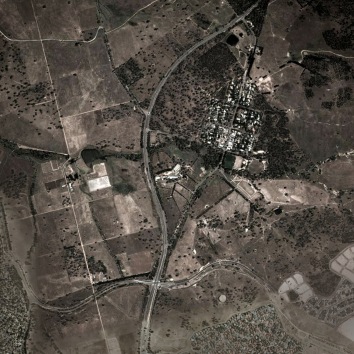 The background layer for each of the four elements in Frame of Reference is formed by an image of Hall, a small village later absorbed by Australia’s capital taken from space – nestled amongst its surrounding hills and in proximity of the encroaching suburban developments. Like a compass, each image points at one of the cardinal directions. An aerial view of Hall’s distinct and contained layout suggests to me the shape of an insect nestled on a leaf, an outline the bypassing highway forms, prompting reflections on the interrelationships between the small and often overlooked elements within complex systems. The historic and rural qualities of Hall are an important asset to the nearby capital and in return, the urban proximity assures Hall’s prosperity. Like insects in their myriad of forms, their role in the well-being of the biosphere they inhabit is indicative of and influences systemic changes. Discovering recurring patterns, visually and conceptually, informs my working processes as an artist and contributed to the layers within this work. The objects I photographed from the Hall Museum collection were chosen for their intrigue. The narratives and nostalgic values they hold are intrinsic to the enthusiasm motivating the collection and appreciation of such objects. Materials chosen to reflect those qualities frame this work.

Frame of reference was made in the context of Portrait of a Nation: Unmade Edges, Distinctive Places – Hall project,  Centenary of Canberra 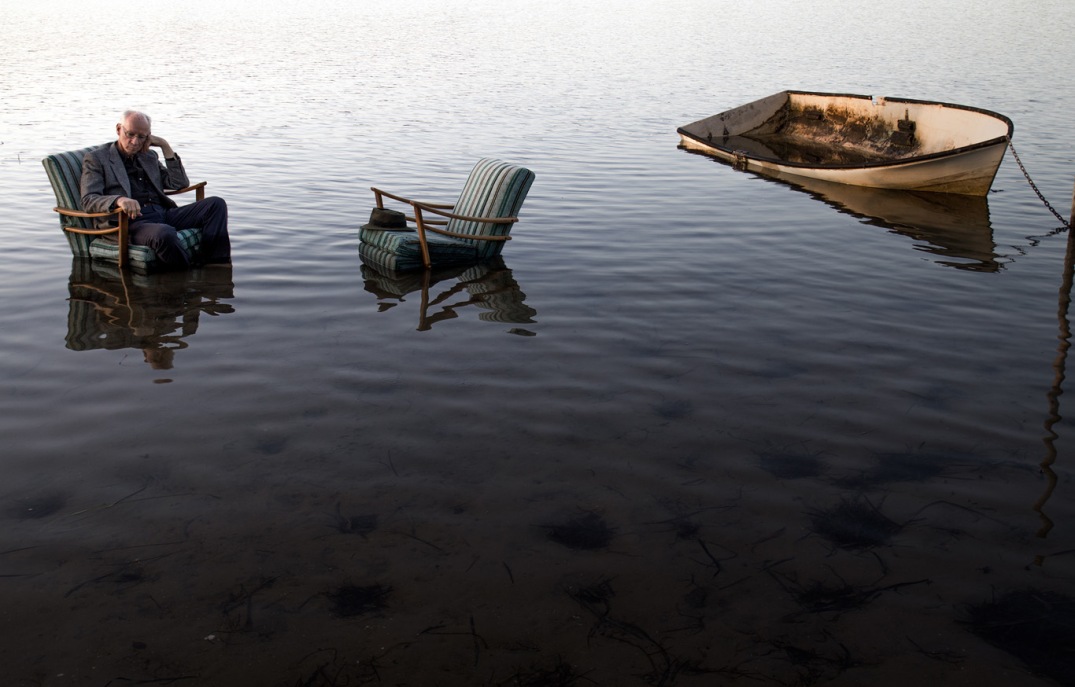 In our fast moving contemporary society it is not surprising the subtle shifts beyond our own front doors go by unnoticed – perhaps until they no longer can be ignored.  On the other hand, an eager awareness of observations pointing towards unprecedented changes in our natural systems and the daunting unknown can be paralyzing, instead of inducing urgency for action. Actions initiate changes, but how many of those actions, in our ceaseless yearning for progress, now require counter actions?

Adaptation comments on the process of adjusting to changing circumstances, which the human species has proven to be so versatile at during its relatively short residency on the planetary timescale. Adaptation implies the need to accommodate an inevitable and impending change, but it also indicates resilience, a quality of our species that is steeped in hope. However, our deep interconnection with the trillions of life forms we breathe in and around raises questions. Will they too be able to join us on the journey of adaptation? 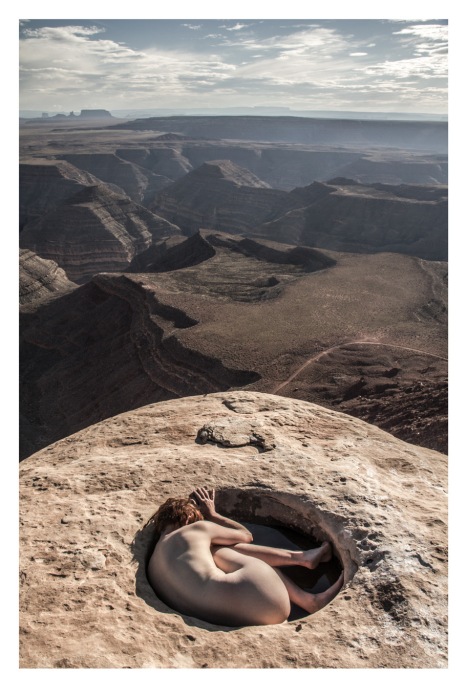 Muley Lacuna contains several distinct and remarkable landscapes within one frame (in the foreground the Cedar Mesa elevated above the Goosenecks Valley; the distinct features of Monument Valley in the far distance). The circular cavity in the mesa’s ledge, formed eons ago, provides a perfect fit for a human body, the road in the middle distance reduced to the size of an umbilical cord connects the womb-like shape with what lies beyond the frame. Exposing the body in the wide-open space becomes a humbling act, dwarfing existence in space and time. The folded body mirrors the peculiar shapes the San Juan river left throughout its snaking journey – a testament to the power of water, an element found in such scarcity in the arid Southwest, yet constituting over half of the human body. The geomorphic history of the surrounding landscape contrasts that of a human lifespan and heightens a sense of vulnerability. The bare body rests in protective fetal position. The skin the colour of sandstone, immersed in the matter preceding our existence – a quiet laudation to our ancestry.

The Bonneville saltflats, on the western edge of Utah, are the remnants of ancient lake Bonneville. Framed by barren mountains, they form an extensive, inhospitable, yet intriguing landscape. Getting lost in the vast expanse offers perspective – down to the humble compound forming the base for this reflective surface. Like water, salt forms an essential part of life, mirrored in each cell of our body. A sense of homecoming accompanies my encounter here. Wrapped safely in my space blanket I attempt a camouflaged navigation through the brine of my ocean ancestry.

Nightfall was captured on a full moon night in amongst the Ponderosa pines of the Kaibab forest (Arizona). The work combines my love for drawing in space and the ambiguity of night photography. Perhaps in an attempt to pay tribute to the continuous process of regeneration and decay, I applied the linear forms of the needle clusters in their varying shades of decomposition to draw the simple, yet complex form of the plant’s seeding body. Spatial relationships become accentuated, possibly distorted, when engaging with vast landscapes like that of the American South West. The proximity to the majestic Grand Canyon seems so palpable amongst these towering pines, leaving me dwarfed by their overwhelming magnitude. 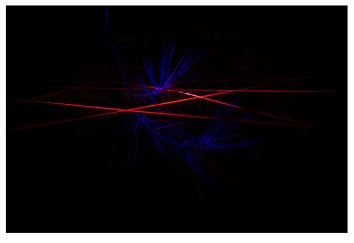 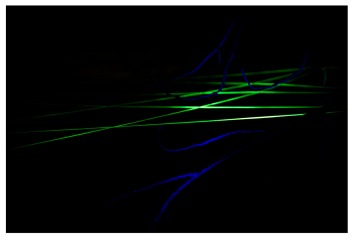 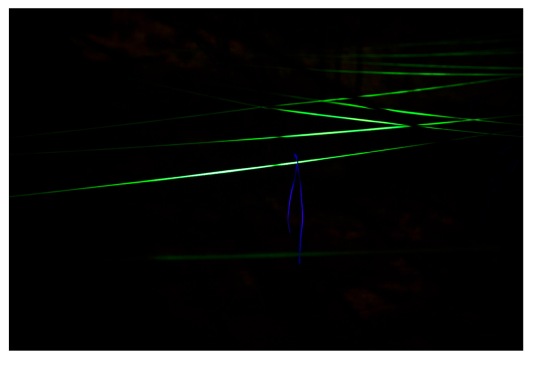 The Crossed cultures series developed as a response to the unexpectedly rich variety of fungi we encountered upon arriving in the forest of the Grand Canyon’s North Rim. The fruiting body’s brief appearance prompted contemplation on the vast invisible networks of mycelium so instrumental in contributing to an ecosystem’s well being. The English mycologist Alan Rayner regards them as ‘troops, variously equipped for different roles and in varying degrees of communication with one another. Without a commander, other than the dictates of their environmental circumstances, these troops organise themselves into a beautifully open-ended or indeterminate dynamic structure that can continually respond to changing demands’. (Alan DM Rayner, ’Conflicting flows: the dynamics of mycelial territoriality’, McIlvainea 10 (1991) 24-35) In an attempt to ‘bring to light’ those hidden systems, I used what I had at hand – builder’s string and a black light.

Enola Gay dawn (no regrets) embodies aspects of our responses to the monumental presence and significance of the Enola Gay Hangar, the temporary home of the first aircraft to drop an atomic bomb, and our encounter with representations of American military history observed on the airfield of Wendover, Utah.

aqueous explores through photography and abstraction the interrelationships of the aqueous – defining and moving the human body within its boundaries and its immediate environment. 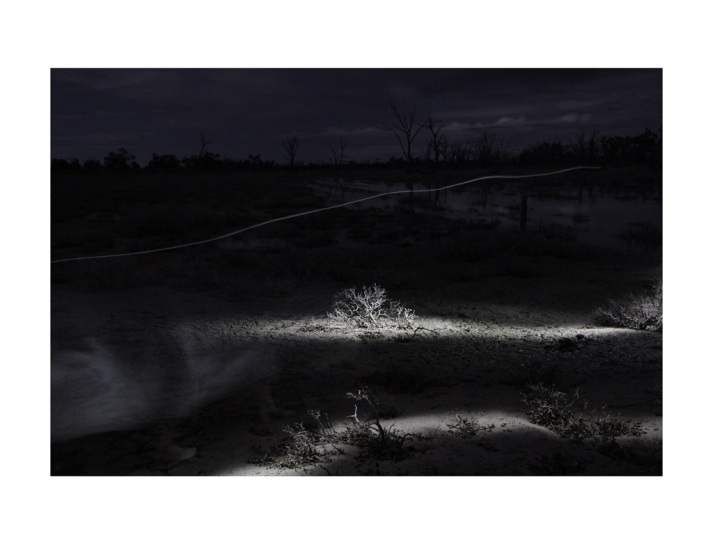 In & out of place ll

In & out of place lll

In mid-2011, a group of visual artists from the Australian National University and the University of New Mexico drew inspiration from fieldwork at Calperum Station, South Australia. Part of the Riverland Biosphere, Calperum is an enclave for mallee scrubland – one of the most endangered vegetation types in the world. This exhibition presents a selection of aesthetic responses to the natural and cultural features of ‘the mallee’ and its surrounding landscapes.

In the Spirit of… 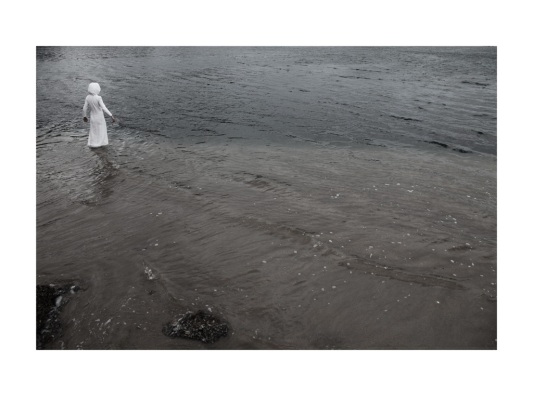 wed to a land of many songs
where the sea meets the river, meets
the sheltered cove
I met the ancient ones below.